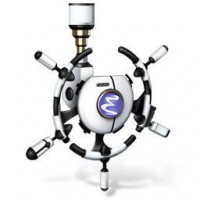 Helm is an Emacs framework for incremental completions and narrowing selections. It helps to rapidly complete file names, buffer names, or any other Emacs interactions requiring selecting an item from a list of possible choices. Helm is a fork of anything.el, which was originally written by Tamas Patrovic and can be considered to be its successor. Helm cleans the legacy code that is leaner, modular, and unchained from constraints of backward compatibility.

Maintainance of Helm is a Lot of work I have done freely since 2011.
As it is taking a lot of my time it starts to be more and more difficult
maintaining it without financial help.
If you feel Helm is making your daily work easier,
please consider making a donation.

Helm is an Emacs framework for incremental completions and narrowing selections. It helps to rapidly complete file names, buffer names, or any other Emacs interactions requiring selecting an item from a list of possible choices.

Helm is a fork of anything.el, which was originally written by Tamas Patrovic and can be considered to be its successor. Helm cleans the legacy code that is leaner, modular, and unchained from constraints of backward compatibility. 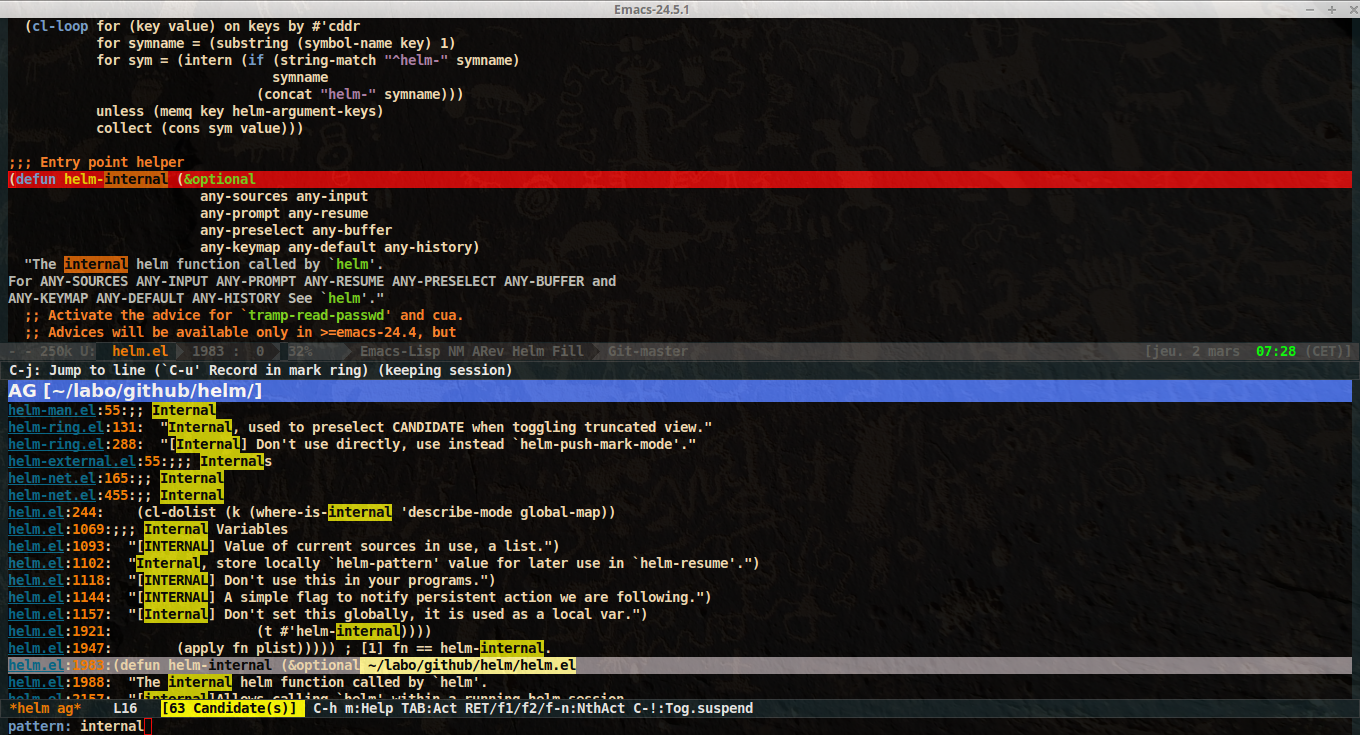 In addition of its framework where you can build your own Helm applications, Helm provides preconfigured commands to browse and search incrementally in files, buffers, bookmarks etc… and much more. Helm allows displaying different sources in same session. Helm displays its candidates in a window or a frame, keeping the minibuffer for user input. Helm provides a full set of actions for each of its sources, each action apply on a single candidate or a set of marked candidates.

Note: You will find many helm extensions providing diverse features sometimes already implemented in Helm, prefer generally the ones that are natively in Helm, e.g. Helm support natively most grep implementations as backend (ack, ag, rg), no need to install 3rd party packages for this, same for managing projects etc…

There are several alternatives to Helm nowaday, they are all providing incremental completion but they lack all the Helm features due to their wrong implementation abusing minibuffer.

NOTE: This is not the recommended way to install packages.

helm-core package is available on MELPA for third party packages that depend on helm libraries. These packages should require helm as follows:

Installation methods that circumvent helm-config are known to fail if the careful safeguards are not implemented in the hacks.

For minimal helm configuration, run the start-up script ./emacs-helm.sh and then see the file /tmp/helm-cfg.el.

The full configuration I (the helm maintainer) use is here.

Enabling helm-mode will enable helm for many features of emacs requiring completions, see below how to enable helm-mode.

In any helm session,

Use it with no moderation!

Use these embedded Info screens first before reporting bugs.

M-x helm-mode to enable helm completion for common Emacs commands. Note that the helm functionality enabled through helm-mode comes from a generic implementation and does not include all helm features available through equivalent helm-specific commands. See FAQ about M-x and C-x C-f.

Note: When helm is installed with “make install” you will have a shell command named helm that you can run from any places i.e. not only from the helm directory

Helm support by default multi pattern matching, it is the standard way of matching in helm. E.g You can use a pattern like “foo bar” to match a line containing “foo” and “bar” or “bar” and “foo”. Each pattern can be a regexp.

The candidates list may be replaced by a function that produces a list. See (helm wiki) for details.

These are popular applications developed using helm completion and narrowing framework. They are available for individual installs through the Emacs package manager. This list is not exhaustive.

Normally all Helm modules coming from Emacs-helm organisation are safe to use otherwise it is mentioned in their README if they are broken or unmaintained. Here some of them I am using:

Warning Helm development has sparked quite a few extensions, many of which duplicate features already included in helm. Some of these packages (about 20 at last count in the MELPA repository) are either deprecated or unmaintained. Moreover, many remain out-of-sync with helm core development cycles causing incompatibilities. To avoid helm problems or unstable emacs, please look for comparable features within helm and emacs-helm before installing such extensions e.g. helm-swoop vs helm-occur which is part of Helm.

Other emacs extensions recommended with helm

The Helm project has a current unresolved issue list. Please feel free to fix any of them; send a pull request.

Most issues come from a wrong configuration or a use of Helm modified externally by third party package e.g. Spacemacs. Some other Helm packages that are no more maintained (or badly maintained) and use deprecated Helm code will clash also with recent Helm be aware.

The Helm Team welcomes bug reports and suggestions. Note that not all bugs when using Helm are due to Helm. Because of the way Helm interacts with many Emacs features, bugs may be related to Emacs itself.

One way to ascertain that the bugs are helm-related, recreate the error either by using Emacs -Q or by running the included package script ./emacs-helm.sh located in the helm directory.

Helm comes now with a template for filling bugs, when reporting issues, be sure to fill all sections and to run helm from a minimal install as described above to reproduce your bug.

Or ask directly on Helm discussions